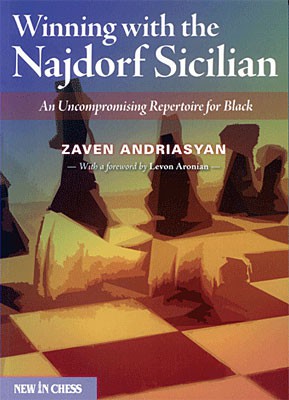 Young Armenian grandmaster Zaven Andriasyan has developed and successfully employed his very own attacking repertoire for Black in the Najdorf.

In this book he points out ways to avoid the most dangerous white systems, such as the English Attack, and presents ideas for Black to fight for the initiative right from the start.

Revisiting all major Najdorf battlegrounds, Andriasyan challenges accepted views and sheds new light on this great opening. In his search for new paths he has found a great number of radical improvements, resulting in a complete, surprising and punchy repertoire.

After you have read and studied Winning with the Najdorf Sicilian, you will be ready and happy to take on 1.e4 players at all times!

With a foreword by Levon Aronian.

Zaven Andriasyan (1989) was both European under-18 and World under-20 champion in 2006. He is currently one of the strongest grandmasters in Armenia. Zaven Andriasyan regularly writes for the New In Chess Yearbooks.