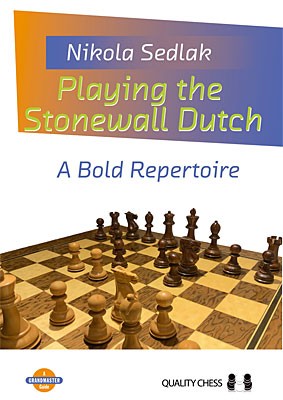 Beschreibung Bewertungen 0
Beschreibung
The Dutch Defence is one of Black’s most combative responses to 1.d4, and the Stonewall is the... mehr
Menü schließen
Produktinformationen "Sedlak, Playing the Stonewall Dutch - kartoniert"

The Dutch Defence is one of Black’s most combative responses to 1.d4, and the Stonewall is the boldest version of this opening. Black immediately seizes space in the centre and clamps down on the e4-square, laying the foundations for a complicated strategic battle.

Many players believe the Stonewall to be a substandard opening, naively assuming that the e5-outpost and bad light-squared bishop must give White the advantage. GM Nikola Sedlak disagrees, and in Playing the Stonewall Dutch he shares the insights that have helped him to rack up a healthy plus score from Black’s side. In addition to providing a complete repertoire in the main lines of the Stonewall, this book also offers useful guidance on dealing with Anti-Dutch variations and various move-order subtleties.

GM Nikola Sedlak is a former Serbian Champion who has won both the EU Individual Open Championship and an Olympiad gold medal. He has played the Stonewall for many years against strong opponents, achieving excellent results.