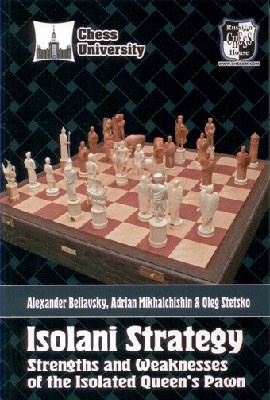 Aaron Nimzowitsch, one of the greatest chess researchers, called the problem of the isolani - his term for the isolated d-pawn - 'one of the cardinal problems in the whole theory of positional play'.

In the present book, on the basis of numerous practical examples, the authors explain the methods of attack and defence in positions with an isolated d-pawn, from just after the opening to deep into the endgame.

Grandmaster Alexander Beliavsky is best known as a four-times winner of the USSR Championship, grandmaster Adrian Mikhalchishin was a member of Karpov's training team during his epic matches with Garry Kasparov, and national master Oleg Stetsko is a highly experienced trainer and writer.

PART I. The isolated d4-pawn

Chapter 2. The d4-d5 breakthrough
Chapter 3. Attack on the queenside
3.1. Exchange on d5
3.2. Attack on queenside weaknesses

Chapter 4. Defence based on the blockade at d5
4.1. Reducing attacking potential by exchanging pieces
4.2. Counterplay based on control of the blockading d5-point
4.3. Creation of an isolated pawn pair
4.4. Creation of a central pawn pair

Chapter 7. The isolated pawn with a small number of pieces