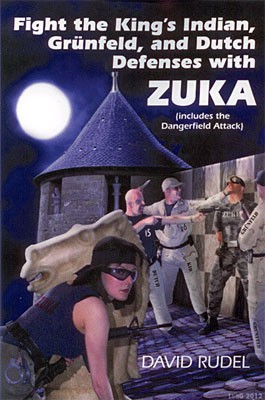 Nearly a century ago, Aron Nimzowitsch instigated a revolution in chess strategy, claiming a player need not occupy the center to control it. The popularity and strength of the King's Indian Defense, which invites White to build a center that Black can attack, has demonstrated the value of this hypermodern style.

David Rudel, author of the tremendously popular Zuke 'Em, presents a cohesive, plug-and-play system against repertoires based on a K-side fianchetto (e.g., the King's Indian, Grunfeld, and Dutch). He shows how White can turn hypermodern defense on its head by refusing to let Black utilize his early development advantage, putting the onus on the second player to justify his lack of space.

This integrated system, which Rudel nicknamed Zuka, can be incorporated into any traditional 1.d4 repertoire, whether White intends 2.c4 or 2.Nf3. Note that Zuka contains the entirety of Rudel's work on the Dangerfield Attack. The Dangerfield Attack sub-portion of this book has been published concurrently as a separate book (Dismantle the Dutch with the Dangerfield Attack), but the two books have the same content with respect to the Dutch defense.