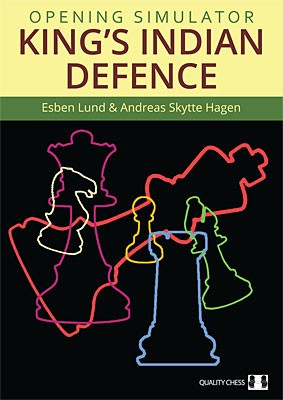 The King’s Indian Defence is a popular opening at all levels. Fischer, Kasparov, Bronstein, Nunn, Radjabov and Nakamura are just a few of the many leading GMs who have played it successfully.

Opening Simulator is a new and innovative approach to studying the opening, based on the Deliberate Practice concept. Rather than presenting moves and variations, the authors offer a 'read, solve and play' approach which is designed to replicate a real game more closely than other opening books. First, a thorough Introduction discusses the main variations, pawn structures and themes. Then, after working through the 400 carefully chosen exercises, the reader will benefit from enhanced tactical and problem-solving ability.

Unlike a normal puzzle book, the exercises all stem from the King’s Indian, making this book the ideal resource for King’s Indian players of all abilities to hone their skills.

Andreas Skytte Hagen is a Danish IM with one GM norm, and an experienced King’s Indian player who came up with the Opening Simulator concept.

Esben Lund is a Danish IM and a respected author and trainer. He is a 1.d4 player with extensive experience playing against the King’s Indian, thus both sides are represented in this book.