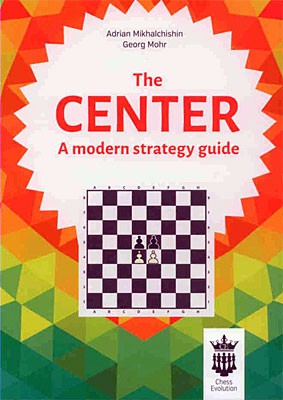 
There is a blank spot in the huge world of chess literature: systematically presented middle- game. Th erefore authors, both long-term chess trainers, decided to fi ll this vacuum. With a series of books about the middle-game, we would like to present diff erent topics of chess tactics and strategy in a slightly diff erent way. Books, which will be published in the coming years as part of the series, are planned to cover all frequently discussed themes, as well as many others topics those about which chess players and also trainers usually do not think as deeply as they should in order to achieve better results.

We are starting our series with a book about the centre. We will take two diff erent approaches to this topic: the classical one, which will help us to discover all fundamental knowledge about the centre. Th is study is crucial for good understanding of chess. Th e second approach is more modern: we will think about the centre more dynamically, through the eyes of a grandmaster, a practical chess player. We will try to copy this two-part structure in the future books, in which planning, analysing, move decisions, pawn structures and various other topics will be discussed.

ABOUT STRATEGIC PLAY IN THE CENTER

Weak squares in the center

The weak square as a trump!

Complete control over the center

Exchanges in the center

The blockade of the center with the pieces

THE TYPES OF CENTERS

The domination of the mobile center

A feeling for time

Passed pawns in the center

The pressure and the blockade

The tactical fight against the center

The undermining of the mobile center

The d4-e4 pawn against the e6 pawn

The initiative on the queenside and the transposition to the endgame

The attack on the king

The defence of the open center

The planned opening of the play

Attack the blocked center with pawns

The attack with brute force

Positions with an isolated pawn

Playing against the isolated pawn

The attack on the kingside

The attack on the queenside

The battle against the c-pawn

The advance in the center

Active play in the center: the advance of the pawns!

DYNAMICS OF THE CENTER

Power of the center

Control of the center with the pieces

Weak squares in the opponents camp

Creation of the passed pawn

Pawn sacrifices in the center

Flank strategies against the center

Changing the structure of the center closing the center

Blockade of the center

Doubled pawns in the center