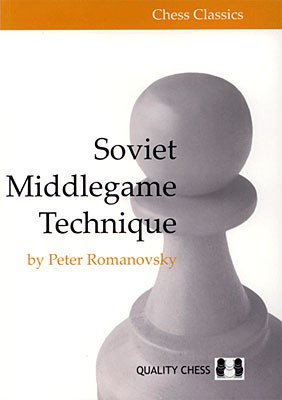 Romanovsky was undeterred and finally recreated his improved book in 1960. His writing was later translated into English and published in two titles one on Planning and the other on Combinations. In this fresh translation we have included both works to create the ultimate version of a classic of Soviet chess literature.

GM Alexander Kotov on Romanovsky: One of the best books in the world s chess literature.


Foreword by the UK Publisher

1. Two Wins by Wilhelm Steinitz - Their Creative and Technical Substance
2. Stages in a Plan - Square and File as Targets of the Plan - The Preparatory Stage - The Stage of Concrete Action - Exploitation of Gains
3. Play on the a-File
4. The Centre - Its Strategic Significance - Knights on e5 and d5 (e4 and d4) - The Pawn Centre - Attacking with the Centre Pawns - Hanging Pawns
5. More about Active Pawn Play - The Pawn Wedge and How to React to It - The Nail Pawn - The Phalanx of e- and f-pawns - The Pawn Storm
6. Battle of the Major Pieces
7. Manoeuvring - The Initiative
8. The Two Bishops

9. What is a Combination
10. The Elements of Combination - Motif and Theme
11. The Aesthetics of Combination: General Concepts
12. Idea and Technique of an Incarcerated King Combination
13. More about Aesthetics - Pseudo-Sacrifice - Queen Sacrifice
14. On the Theory of Combination - Typical Ideas
15. Modern History of Combinations - The Immortal Game - Masterpieces from the End of the 19th Century
16. Double Attack - Attacks on Pieces by Pawns
17. Positional Weakness as a Combinative Motif - Combinations Invited by Weaknesses in the Castled Position - Sacrifice of Bishop for Pawn on g3, h3, g6, h6
18. Combinative Attack with Two Bishops - Harmonious Action of Rooks on the Second and Seventh Ranks - Rook Sacrifice on g7
19. Harmonious Action of Rook and Bishop - The Theme of Trapping a Piece
20. The Interference Device in Various Combinative Schemes
21. How Players Think During the Game