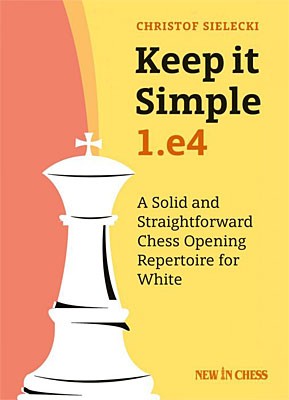 Why is this opening repertoire called simple? For the simple reason that the variations are straightforward and easy to remember, and require little or no maintenance.

International Master Christof Sielecki has created a reliable set of opening lines for chess players of almost all levels. The major objective is to dominate Black from the opening, by simple means. You don’t need to sacrifice anything or memorize long tactical lines. Unless Black plays something stupid, when tactics are the simplest punishment.

Sielecki developed this repertoire working with students who were looking for something that was easy to understand and easy to learn. Most of the lines he selected are occasionally played by grandmasters, but on the whole they lie outside the mainstream of opening theory. That means that there is hardly any need to monitor theoretical developments.

Sielecki always clearly explains the plans and counterplans and keeps you focussed on what the position requires. Ambitious players rated 1500 or higher will get great value out of studying this extremely accessible book.

Christof Sielecki is an International Master from Germany. He has been teaching and training chess for many years, and runs a popular YouTube channel called ChessExplained.

National Master Timothy McGrew:
“IM Sielecki has poured an insane amount of time and effort into crafting this White repertoire, focusing for the most part on lines that are used by top GMs but that lie outside of the main streams of opening theory (..) Because the coverage of every option is so extensive, purchasing “Keep it Simple: 1.e4” really is like buying a set of repertoire books. In addition, Sielecki repeatedly points out popular alternative lines that you can study if you want to branch out on your own (..) If you are an ambitious player rated 1500 or higher, and you’d like to round out a serious, bulletproof 1.e4 repertoire suitable for employment up to the titled player level, and you’re ready to squeeze your opponent when the position calls for squeezing and to blitz him when it calls for a lightning strike, you simply can’t lose here.”