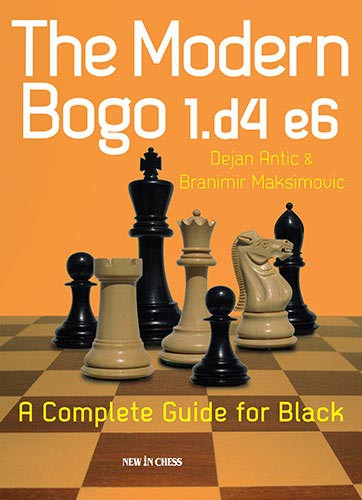 First they wrote the acclaimed The Modern French (against 1.e4). Now The Modern Bogo provides Black players with a comprehensive answer to 1.d4. The two books complement each other perfectly.

The point is that the authors recommend to answer 1.d4 with the direct 1...e6, for the follow-up 2.c4 Bb4+. In this way they avoid complex theoretical Nimzo-Indian lines and enable both amateur and professional players to find their own way in little-explored variations.

The Modern Bogo covers all the possibilities for White after 1.d4 e6... except for 2.e4, after which you should play the French!

Antic and Maksimovic have done a massive amount of research, and found many new strategic concepts and attacking plans. All of them are explained clearly and thoroughly.

You will find that this opening not only gives you good chances to equalize as Black, but also many opportunities to play for a win.