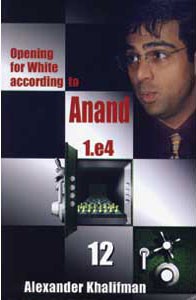 You are holding in your hands book 12 of the series ?Opening for White According to Anand ? 1.e4?. It is devoted to one of the main lines of the Sicilian Defence, beginning with the moves 1.e4 c5 2.Nf3 d6 3.d4 cxd4 4.Nxd4 Nf6 5.Nc3 Nc6. Strangely enough, this system has not acquired yet a universally acknowledged name. It is worth mentioning that the scheme, which we recommend against the majority of the other Sicilian variations in our books, the set-up Be3-f3-Qd2 would not work against this system, because of quite concrete reasons. After 6.Be3 Ng4, as well as in case of 6.f3 e5, Black solves his opening problems rather easily.