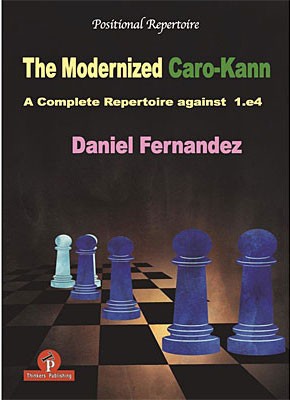 GM Daniel Fernandez (born 1995) has been an active and accomplished player for several years. He represented his native Singapore twice at Olympiads (2010 and 2012) before transferring to the English chess federation. There, he won the national classical titles at U-18 and U-21 levels, and worked to become a Grandmaster while simultaneously studying at Cambridge. The Caro-Kann was instrumental an his quest for that title. Currently, Daniel is known in the chess scene not only as a solid player, but also as a mentor figure to younger English players, as a producer of well-received commentary and analysis, and as a multilingual chess coach. This is his first book.

The Caro-Kann Defence, long reknowned for being a solid and reliable defence against 1.e4, is undergoing a renaissance at the moment. In addition to being a mainstay in the repertoires of a recent World Champion (Viswanathan Anand) and a 2018 World Championship candidate (Ding Liren), it is being flooded with new and creative ideas from a range of other top players, notably Anand's Indian Olympiad teammates Vidit and Adhiban. The pawn structures in this opening leave considerable room for individual interpretation.

This book is written for the Black side, though new ideas for White are suggested and old ones occasionally improved. It contains not opnly the author's personal take on how to deal with all major White tries after 1.e4 c6, but also a range of alternatives for Black- to cater for different types of Caro-Kann player. This repertoire builds on the existing state of theory, taking it in novel, exciting and decidedly modern directions, while not forgetting about the opening's sound strategic underpinnings.