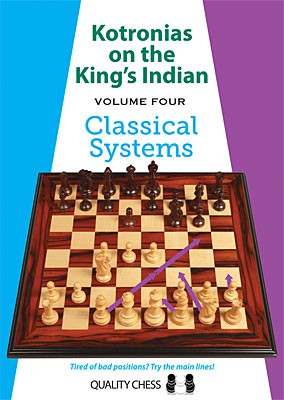 In this, the fourth volume of the epic Kotronias on the King s Indian series, Grandmaster Vassilios Kotronias tackles a variety of White s attempts to challenge his favourite opening, starting with the sequence 1.d4 Nf6 2.c4 g6 3.Nc3 Bg7 4.e4 d6. The all-time greats Petrosian and Gligoric lend their names to systems examined after the further 5.Nf3 0 0 6.Be2 e5, with 7.d5 and 7.Be3 respectively, while the dreaded Exchange Variation 7.dxe5 is also discussed and dismantled. Dynamic coverage of Makogonov s 5.Nf3/6.h3, Karpov s 5.h3/6.Be3, Larsen s 5.Nf3/6.Be3 and Averbakh s 5.Be2 completes this extensive work.

Throughout the work, the author shares his considerable knowledge of typical positional motifs, while providing plenty of ammunition should the game erupt into the full-blooded warfare that is the hallmark of the King s Indian. A special selection of test positions is provided, enabling the reader to sharpen his tactical skills and improve his middlegame understanding.