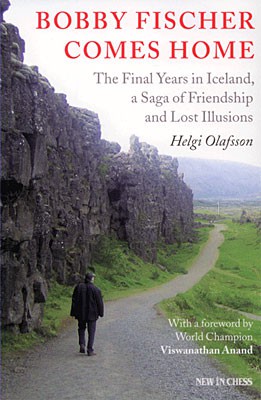 Helgi Olafsson was fifteen years old when in 1972 Bobby Fischer defeated Boris Spassky to become World Chess Champion. Breathlessly, young Helgi followed the Match of the Century and even attended a number of games in Reykjavik s Laugardalshöll.

Little could Olafsson suspect then that 33 years on, having become a chess grandmaster himself, he would be a member of the committee that successfully worked to free Fischer from a Japanese detention centre.

On March 24, 2005 Bobby Fischer returned to the country where he had achieved his greatest triumph. He was never to leave again until his tragic death on January 17, 2008.

Olafsson first met his childhood hero shortly after his return. In the following years, the two spent countless hours together. They made trips, went to restaurants, watched movies, played games, spoke on the phone almost every day, had fun and quarrelled.

Bobby Fischer Comes Home tells the story of a unique friendship and paints an intimate and revealing picture of the last years of the man who many see as the greatest chess player that ever lived.

With a foreword by World Champion Viswanathan Anand.

Helgi Olafsson (1956) is a chess grandmaster from Iceland. He won the national championship six times and travelled the world as a chess pro. Today he is Iceland s national chess coach and writes a chess column for Morgunbladid, the country s number one newspaper.