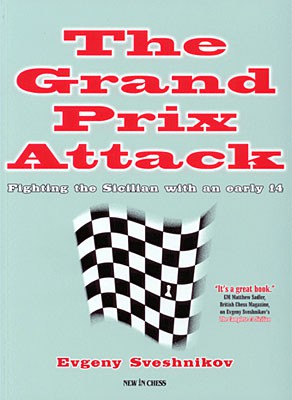 Beschreibung Bewertungen 0
Beschreibung
The Grand Prix Attack is one of White s deadliest weapons against the Sicilian Defence. It... mehr
Menü schließen
Produktinformationen "Sveshnikov, The Grand-Prix-Attack"

The Grand Prix Attack is one of White s deadliest weapons against the Sicilian Defence. It continues to be highly popular with tournament chess players all over the world. While earlier publications mainly focused on tactics, this book the finally gives the GPA the approach it deserves.

Evgeny Sveshnikov, who has extensive experience playing the Grand Prix Attack himself, not only points out the combinative opportunities, but also explains the plans, the purposes and the positional impact of the various lines in a clear and systematic way.

In a special chapter, Sveshnikov explains his own, highly original ideas about the Sicilian Defence, presenting the Sveshnikov System not to be confused with the Sveshnikov Variation!

In this comprehensive book about all lines with an early f4, Sveshnikov looks at possibilities for both colours, brings you up to date on the latest developments and presents a number of cunning new ideas, many of which come from his own games. You will get a completely new view on attacking the Sicilian with an early f4!

Grandmaster Evgeny Sveshnikov, a former trainer of world champion Anatoly Karpov, is one of the most respected opening experts in the world. He recently published the bestselling opening monograph The Complete c3 Sicilian.